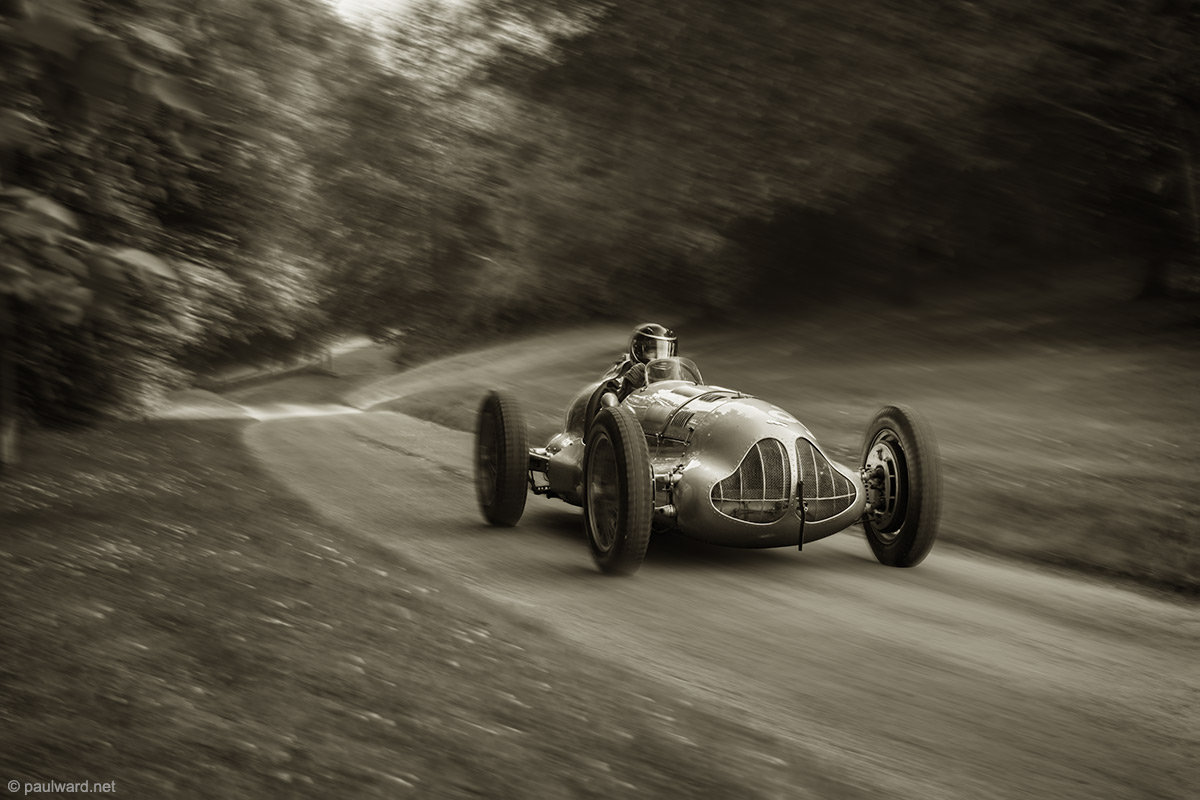 This car was photographed on a location style shoot at a track day event – then retouched to produce a ‘movement’ style image.

In the mid 1930s, English Racing Automobiles or ERA managed to put Great Britain back at the forefront of Grand Prix racing. The six cylinder engined A through D-Type were raced with great success throughout Europe in the popular ‘Voiturette’ (French for ‘small car’) class against the likes of Maserati. With the German Mercedes-Benz and Auto Union teams completely dominating the top class of Grand Prix racing, various other manufacturers took an interest in the 1.5 litre Voiturettes. To take on the renewed competition work was started in 1938 to build a completely new ERA that could potentially also be used against the three litre Grand Prix cars.

Reid Railton, the talented designer of the original ERA had long since left the company to work in the United States. The responsibility of drafting up the ‘E-Type’ Grand Prix racer was bestowed on one of his assistants; Peter Berthon. This was an overwhelming task for the young engineer and it only got worse when the British press got wind of ERA’s intentions of building a full fledge Grand Prix car. Berthon’s resources were also extremely limited as most of the company’s backers were preoccupied with preparing for War, which became a bigger threat every day.

At first glance it is immediately obvious that Berthon was greatly inspired by the dominant Mercedes-Benz Grand Prix cars. The E-Type looks just like a mini W154. Under the aluminium panels there is evidence that Berthon borrowed some designs from the Germans. In fact the DeDion rear axle is a blatant copy of the rear end of the W125 right up to the locating ball with corresponding slot in the final drive unit. Slightly lower than previous ERAs, the chassis was conventional with two tubular side members. Front suspension was by trailing links and transverse torsion bars.

One of the biggest problems Berthon faced was unavailability of an engine that suited the contemporary Grand Prix regulations, which allowed for a 3 litre with forced induction or 4.5 litre for unblown engines. Smaller engined machined could run with a lower minimum weight, but all successful cars were equipped with the largest possible engine. As a stop gap, Berthon developed the Riley derived six cylinder engine to its largest possible displacement, which ERA claimed was 2.2 litre. It is more likely that the largest engine used was a 2 litre, similar to the one fitted in the D-Type. For the E-Type power was increased by 20 bhp to 260 bhp.

After lenghty delays, the E-Type with the ambitious chassis number ‘GP1’, first took to the track during the 1939 International Trophy at Brooklands. It was fitted with a 1.5 litre version of the straight six, so it could be raced in the Voiturette class. Even in this form the E-Type was highly uncompetitive against the German and Italian competition and was withdrawn after practice. Thanks to its very small frontal area, the E-Type did prove to be very fast in a straight line, but the handling let it down. One of the biggest culprits was the overly complex steering through a large number of gears, which made the steering remote and at times completely unpredictable.

After its disappointing debut, the car was shipped to France for the Grand Prix at Reims. Although being clocked at 275 km/h on the tracks long straights, it was again withdrawn before the race with technical problems. In the hands of Arthur Dobson, the E-Type finally made its racing debut at Albi. Dobson led the race when he crashed out and was forced to retire. Before the hostilities ended all racing activities, the ERA was entered in one more race and again withdrawn before the start. After the War a second E-Type was built, but despite being raced up until 1950 no notable results were achieved.