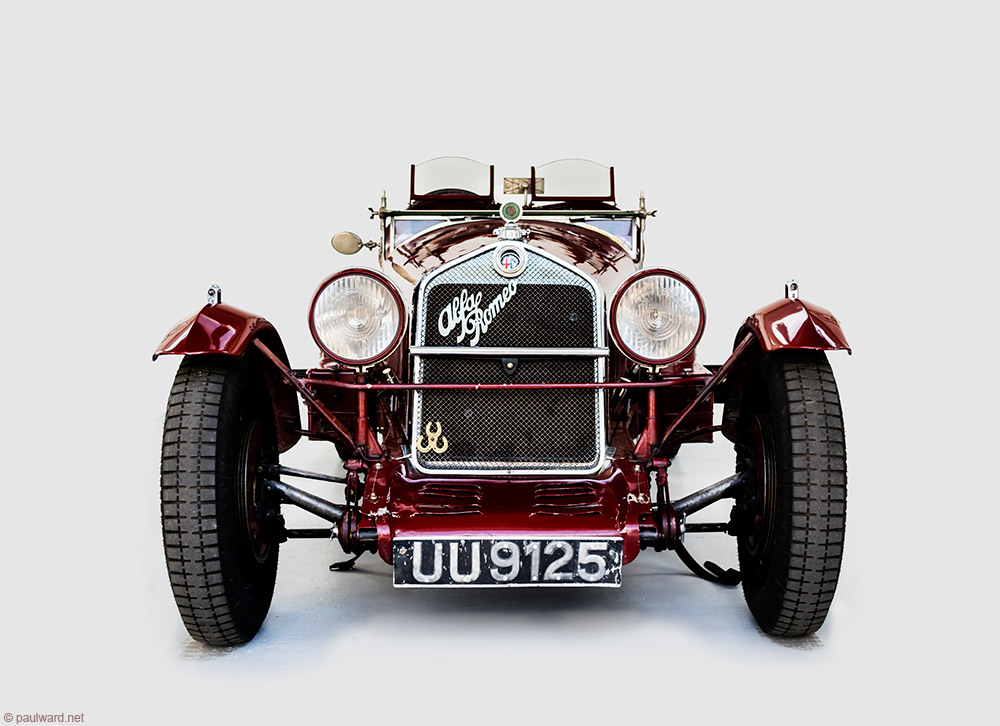 This car, chassis 0312905, has an exceptional history that has been pieced together in its entirety through careful research. Before we recount the story of this car, here is a reminder of how the fabulous machine, the 6C 1750, was born.

The birth of the six-cylinder Alfa Romeo

In the early 1920s, Italy was full of brilliant engineers working on racing cars. One of these, Vittorio Jano, joined Alfa Romeo in 1923 with the task of designing a new Grand Prix car to replace the P1 created by Merosi. The result was the P2, one of the most outstanding race cars of the last two years of the 2-litre Formula. After the 1925 season, the car participated successfully in Formula Libre events through to 1929, and in a modified form, until the end of 1930. At the same time, Alfa Romeo asked Jano to work on a new straight six-cylinder ohc engine for a road car, the Tipo 6C 1500, presented in bare chassis form from the end of 1925 at various European Motor Shows. This chassis featured conventional suspension, but special alloys were used in individual components and this allowed many of the parts to be far lighter than similar parts used previously and by other makers of the time. As time went by, this type of engineering was applied more and more to different parts of the car.

The wheelbase was 2.92m for the Sport and Super Sport versions but 3.10m for cars fitted with more formal bodywork.

The engine came in three main forms – single ohc (Normale), twin ohc (Sport) and twin ohc with a blower (Super Sport); the latter required the engine to be moved back in the frame to allow for the blower to be driven off the nose of the crankshaft. The Normale had the cylinder block and head in one unit whereas the twin cam was usually fitted with a detachable head. However, some of the Super Sports (the Mille Miglia Speciale) had block and head in one unit called ‘testa fissa’. All types had five main bearings (except for a very few later testa fissa engines that had eight) and the overhead camshafts were driven via a vertical shaft at the rear of the block. Water pump and dynamo were also driven off the rear of the crankshaft via a set of cross-shaft gears. The cylinder head featured Jano’s unique valve adjusting arrangement using a special tool.

Production started of the Normale version in 1927 and was mostly fitted with formal bodywork. The Sport was usually fitted with open bodywork but more usually “drophead Coupée” or “cabriolet” rather than “spider”. The Super Sport, as prepared for racing with the exceedingly rare testa fissa engines was used almost exclusively for the Alfa Romeo factory cars. The fuel tank was located immediately behind the driver on these cars which, Coupéled with the revised engine location, gave a very balanced weight distribution and the marvellous handling associated with all Jano’s 6C short chassis cars. There was initial sporting success in 1927 in local Italian events, especially hillclimb

This particular car,chassis 0312905, is a wonderful example of the first Super Sport third series with supercharger, of which 50 were produced on the 2.745m chassis. Imported from Italy in chassis form by FW Stiles, the head of Alfa Romeo England, the car was initially fitted with a Carlton Carriage body, and sold to JD Benjafield, an amateur driver better known for his links with Bentley (he won the 1927 Le Mans 24 Hour race in a 3-litre Bentley).
The car was registered UU 9125 on 21 June 1929 and on 29 June took part in the BARC 6 Hour race at Brooklands where Benjafield finished 4th. Two weeks later, the car was in Dublin for the Irish Grand Prix, finishing sixth after a brief ‘off-road’ incident. An identical car won the race, driven by Ivanovsky. On 20 July, Benjafield took part in a hillclimb event organised by the Middlesex Automobile Club and won his class.
He then entered the Tourist Trophy race on 17 August in Northern Ireland, reportedly finishing the event although not classified. Giuseppe Campari, at the wheel of a works Alfa Romeo 6C 1500, finished second behind Carraciola in his Mercedes SSK.
It is likely that Benjafield sold his car back to FW Stiles after this action-packed season, and that it was given a new body at this time. According to certain sources, the car was used by Nuvolari for testing at the 1930 TT. However, although a car registered UU 9125 certainly appears in photos of the event, detailed research suggests it was a different example. Changes of registration were not uncommon at that time.
the car was later taken to Ireland, where it stayed until 1986, owned by subsequent owners Walsh, Hall and Templeton. While belonging to Hall (the owner of a garage in Lucan), the car had some repair work carried out, and a new body built to replace the previous one that was at the end of its useful life. Hall’s correspondence with Alfa Romeo in Milan (which offered advice and plans), Thomson & Taylor, Brooklands Engineering and Chiltern Cars amongst others, demonstrates the trouble he went to gain the right advice and correct spare parts. His personal correspondence with FW Stiles is also fascinating.
In 1986, the car was acquired by John Guyett who mentions a restoration carried out by Templeton in 1972. He parted with this Alfa Romeo at the end of the 1990s, selling the car to Nathalie Chaunavel, who asked Paul Grist to carry out a complete restoration.

Today, the condition of the car reflects the care taken by the restorer to give it the appearance of an original, unrestored but regularly maintained automobile. A judicious choice of materials, expertly used, has produced this superb result.
(source – classicdriver.com)