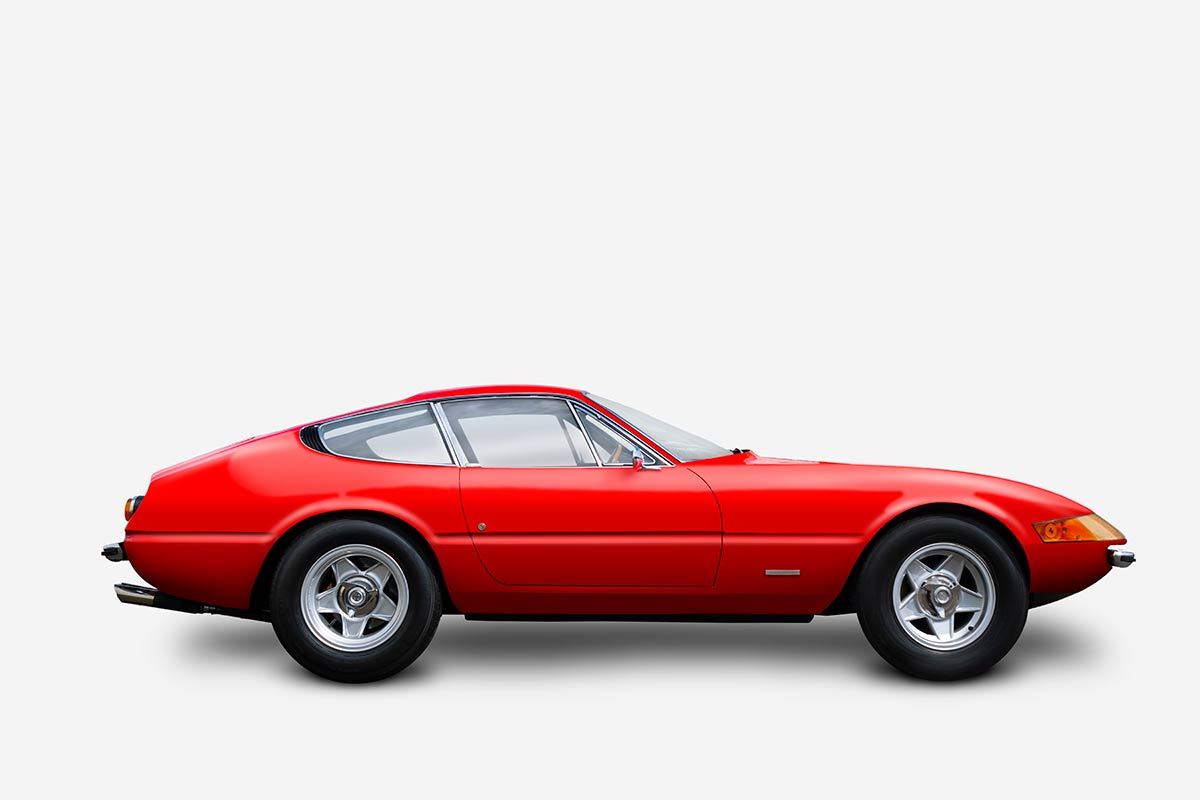 The world famous Daytona name was unofficially conjured up by the press in recognition of the firms stunning 1-2-3 victory at 1967’s Daytona 24 Hours and – the fact that it was the last front-engined Ferrari GT before the Fiat years also means it occupies a special place in Maranello history. The Daytona was a stopgap model between Ferrari’s outgoing 275 GTB/4 and their mid-engined 365 GT4 Berlinetta Boxer, the development of which was running well behind schedule. Influenced by the fact they were beginning to suffer a number of financial problems, Ferrari decided to produce what was essentially an updated version of an existing model. However, despite the troubled background to its inception, Daytona’s themselves were in no way affected. Ferrari produced what became the definitive GT of its time.

The Daytona’s motor is essentially an enlarged Tipo 226 60° V12 from the previous 275 GTB/4 and is designated Tipo 251. They have a displacement of 4.4-litres producing 352bhp at 7500rpm. At the time the Daytona became the world’s fastest production car with a top speed of 175mph and 0-60 in 5.3 seconds – enough to eclipse every other manufacturer, even Lamborghini. Pininfarina designed the Daytona’s bodywork exuding power from every angle. As a result the Daytona remains one of the most jaw-dropping GT’s to this day.

The 365 GTB/4 was launched during October 1968’s Paris Salon and won enormous praise. It was the fastest production road car available and would be the last of Ferrari’s front-engined GT’s, a fact not lost on writers at the time. Relatively few official options were available, just wider Cromodora alloys, spoked Borrani wires, front bumper bars and air conditioning having been on the upgrade list. After two years Pininfarina carried out a front-end make-over resulting in retractable headlights in early-1971. As production went on, Ferrari made changes to the indicator lenses, later cars more often than not coming with exclusively orange items whereas earlier examples tended to get combination lenses. There was also a switch from aluminium to steel doors (these providing a little more side impact protection) and the arrival of a smaller-diameter leather-rimmed steering wheel. Production ceased in late 1973 to make way for the overdue mid-Flat-12-engined 365 GT4 Berlinetta Boxer. By this time, Ferrari had completed 1284 GTB/4’s, 158 of which were right-hand drive and came to the UK. (source – D K Engineering )