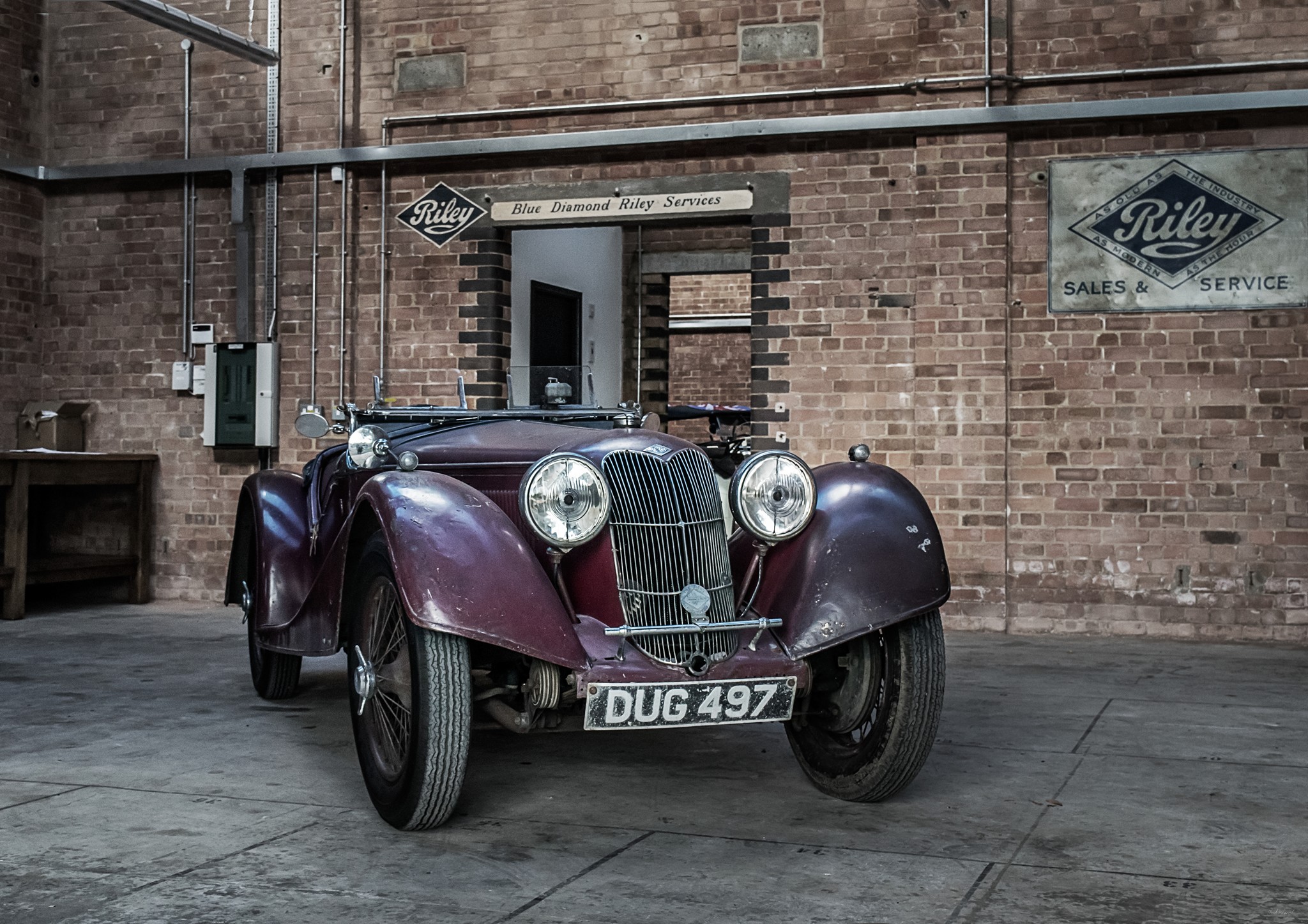 Available as a limited edition print from Limited100

‘The best of the series was the Sprite, which… had a distinctly lively performance up to its maximum of nearly 90mph…’ – John Stamford, ‘The Sports Car’, Batsford 1957.

Introduced in 1926, Percy Riley’s 9hp, 1,087cc twin-camshaft four was an outstanding engine design by any standards, various versions powering Rileys until 1957. Clothed in stylish bodywork by Stanley Riley, the Coventry marque’s pre-war offerings were among the world’s finest small-capacity sporting cars.
Percy Riley’s proven twin-camshaft layout was retained for the new Hugh Rose-designed 1½-litre four introduced in September 1934. The Falcon saloon made its debut on this new 12hp chassis, which was also available with the familiar Kestrel saloon and Lynx tourer coachwork. The following year the range was augmented by the Sprite two-seater sports and three more saloons: the Adelphi and six-light Kestrel on the 112.5″ long-wheelbase chassis and the shorter-wheelbase (106″) all-steel Merlin. In Standard trim the 1.5-litre 12/4 engine produced 45/46bhp with single Zenith carburettor. The Special Series came with twin SUs and 52bhp while at the top of the range was the 59/61bhp Sprite specification engine that added £48 to the car’s purchase price.

In its ‘TT’ guise the new Sprite more than upheld Riley’s sporting traditions, winning the Ulster Tourist Trophy in both 1935 and 1936 with the legendary Freddie Dixon at the wheel, while there were numerous privateer successes at Brooklands and elsewhere. Dixon’s winning car formed the basis for the production Sprite two-seater introduced at the 1935 Motor Show. Clearly related to that of the existing Imp and MPH sports cars, the Sprite’s handsome streamlined bodywork was distinguished by a ‘fencer’s mask’ front grille. The chassis was MPH based and under-slung at the rear, while there was a choice of either manual or Wilson pre-selector transmissions. The Sprite was priced at £425 when launched and continued in production until 1938.

This example of one of the rarest and most sought after of 1930s British sports cars was campaigned by E A (Ted) Denny and E N R Hewitt on the 1937 Monte Carlo Rally. Motor Sport magazine reported that “the Denny-Hewitt Riley was steady and quick”, resulting in a class win for under 1,500cc open cars. Interestingly, for that event DUG 497 was equipped with two spare wheels at the rear and not the single spare wheel cowl that most Sprites had.

Denny sold the Riley after the War to T C (Cuth) Harrison who continued to use it in trials and speed events. Harrison sold it to fellow racer and friend Ms Nancy Binns and H C Ballantine who was the Team Manager for Ecurie Ecosse. Whilst in their ownership ‘Willie’ Wilkinson prepared and maintained the Riley. ( Source – Bonhams )