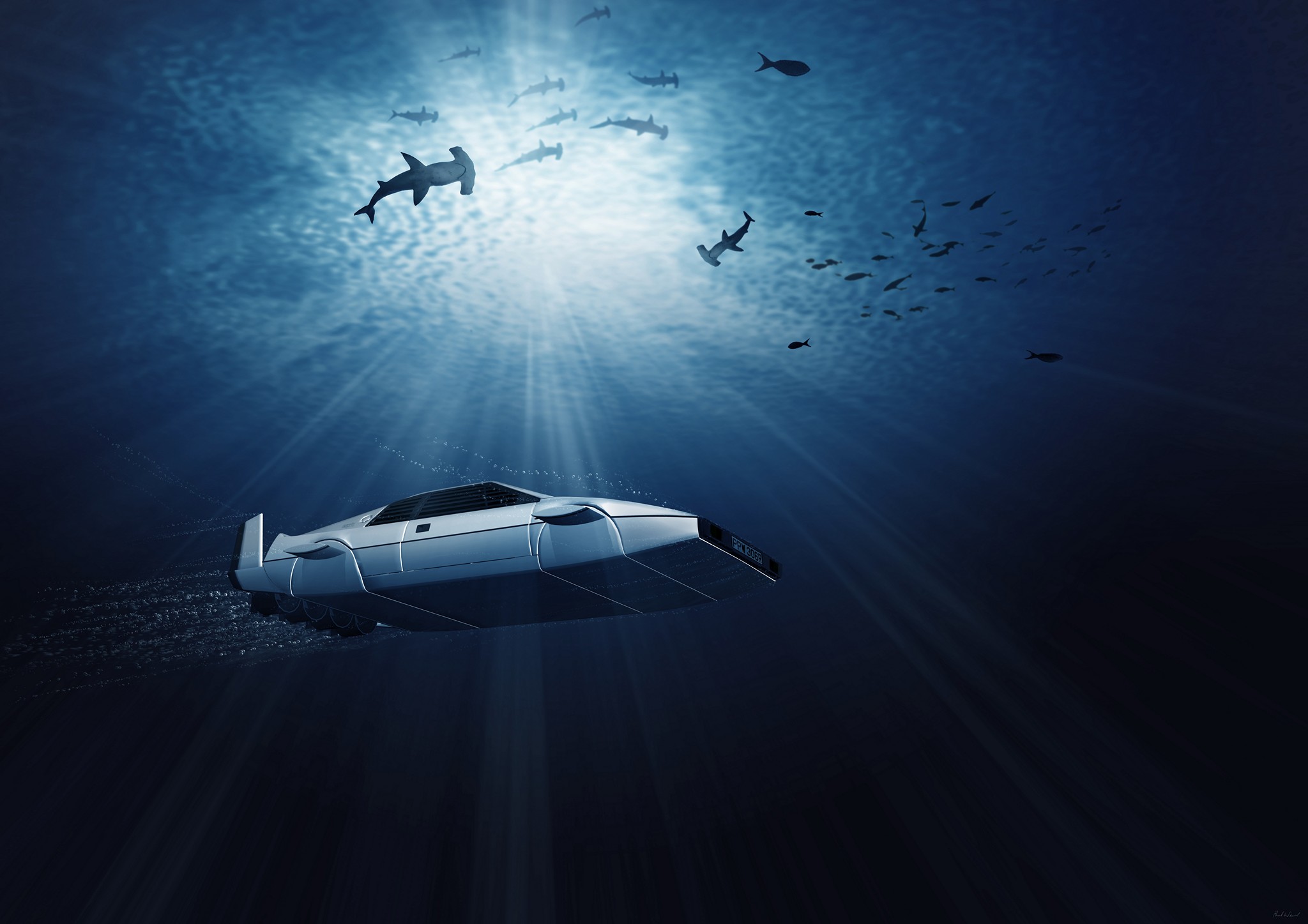 This image is set from a different angle to the other render and is an artistic recreation of a 1976 Lotus Esprit S1, inspired by ‘Wet Nellie’, a custom-built submarine which starred in the 1977 James Bond film The Spy Who Loved Me. The Esprit was chosen to give James Bond a glamorous car to drive. “Wet Nellie” is named in reference to Little Nellie, an autogyro featured in the James Bond film You Only Live Twice, which was itself named after actress and comedian Nellie Wallace.

Limited edition prints of this image are available from Limited100

More info on the car:

The submarine does not maintain a dry interior, and thus is a “wet sub” that requires occupants to don scuba gear. It was built by Perry Oceanographic, Inc., of Riviera Beach, Florida, United States, specifically for the film, using a Lotus Esprit S1 bodyshell, for about $100,000 at the time. The wedge shape of the Esprit is designed to provide downforce, which would cause the submarine to dive. This undesirable force was compensated for by fins placed where the wheels would be in a conventional Esprit. The sub requires a crew of two to operate. It has four electric motors that allowed forward motion only. The interior bears no resemblance to that of a car, being just a platform for the scuba divers, and the equipment used to operate, drive, and power the sub.

During filming of “The Spy Who Loved Me”, the submarine was piloted by ex-U.S. Navy SEAL Don Griffin. The fictional history of the car in the film was that it was developed by Q-Branch of MI6, and its blueprints were stolen by KGB agent Anya Amasova (after Bond asked Amasova “How did you know about that?” Amasova replied, “I stole the blueprints of this car two years ago”). In filming, six Esprits were used (tagged “PPW 306R”), though only one submarine. Three of the Esprits were just empty bodyshells which were used to show each phase of the car-to-submarine transformation. Two unpowered dummy cars fitted with wheels were used to show the Esprit entering and emerging from the sea; the first was designed to be fired from an air cannon off the end of the pier, the second was towed by a rope buried under the beach with a sweeping brush fitted to the underside to cover the rope up as the car was tugged out. When an additional road car was needed for the chase sequences the producers borrowed Lotus chairman Colin Chapman’s personal vehicle.