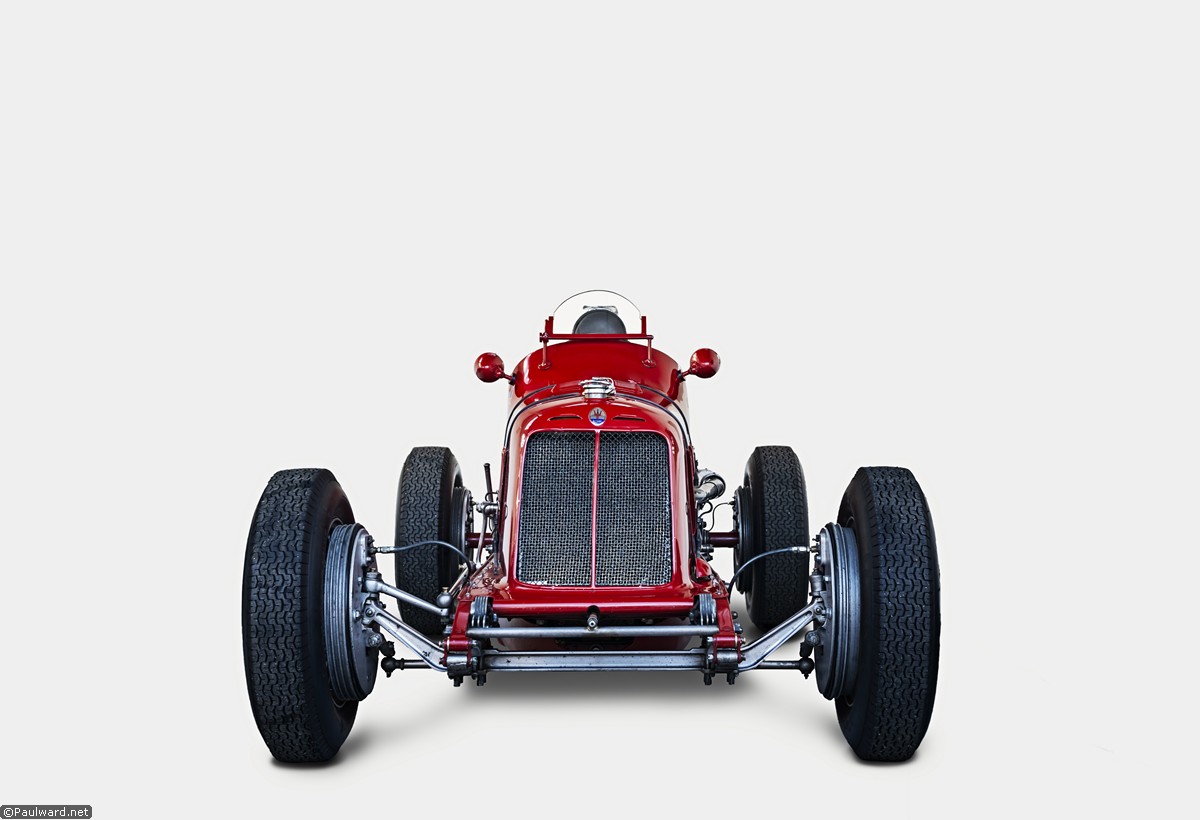 The Maserati Tipo 4CM, Chassis no. 1527, is one of the very machines pressed into to battle by the Modena based works scuderia for a number of significant races during the 1936 season.

The Tipo 4CM Maserati was introduced in 1932. Initially powered by an 1100cc twin over-head camshaft supercharged four-cylinder, the capacity was later increased to 1500cc in order to compete in the ever popular international voiturette or “vetturetta” (in Italian) racing class. The first monoposto to be produced by Maserati, the 4CM’s engine was mated to a four-speed box and the cars were fitted with a hydraulic braking system, a highly advanced design for the time. In various guises and capacities, the Tipo 4CM was produced between 1932 and 1938 and enjoyed numerous successes.

Works records show that this particular “second series” Tipo 4CM, Chassis no. 1527 was completed 8thNovember 1935. Although it is thought to have originally been destined for Conte Luigi Castelbarco, he never took delivery of ‘1527’ and the car was entered for five races during the 1936 season by the Maserati works team, with various “piloti” at the wheel. The first recorded race entry for this 4CM is a rather special one, namely the inaugural Coupedu Prince Ranier, held in Monaco on Saturday 11thApril 1936.

The race was held on the Saturday before the main Grand Prix and lasted for 50 laps – half the distance of the main event. ‘1527’ was entered by the works and piloted by former Alfa Romeo works Grand Prix team driver, Conte Goffredo “Freddie” Zehender and a photograph on file shows the start of the race with Zehender in car no. 70 leaving the line. Practice took

place on the Thursday and, in wet conditions, the experienced Zehender proved to be fastest. Qualifying took place on the Friday and in the dry conditions Earl Howe was quickest on his works E.R.A. at 2m04s, followed by Maserati team member Omobono Tenni at 2m.06s. The three cars of Mays, (E.R.A.) Bianco (Maserati) and Zehender came next all sharing a time of 2m07s. Their grid positions were therefore arranged via a ballot with Mays 3rd, Bianco 4thand Zehender losing out and starting from 5th. Despite promising pace, the Maserati team did not have a particularly enjoyable day. Zehender was in the pits after just three laps with a broken accelerator and eventually retired on lap 43 with a broken piston whilst running in 4thplace. Before the race was over the entire team had retired for various reasons. The E.R.A. works team also suffered from mechanical woes and the race was famously won by Prince Bira of Siam on one of his famous E.R.A.s – his first ever race victory.

The Maserati works did not enter the RAC International Light Car Race on The Isle of Man and thus the next appearance of ‘1527’ during the 1936 season was for the 10thADAC Eifelrennen, held at the famous Nürburgring on 14thJune. Although only eight-laps the overall race distance was over 100 miles due to the length of the circuit. On this occasion, the 4CM was piloted by motorcycle ace turned motorcar racer, Omobono Tenni. Widely regarded as the Nuvolari of the two-wheel racing world, Tenni was a tenacious driver and often nicknamed “The Black Devil.” The entire grid for this voiturette race was picked by ballot and Tenni was placed near the back of the grid. Despite this handicap, he came through the field on a wet drizzly track to finish a creditable 2nd, bested only by his teammate Conte Trossi on a six-cylinder Maserati. Bira was third on his E.R.A.

Just one week later and the cars were at the Grand Prix de Picardie in northern France. ‘1527’ was entered by Maserati for team member and financier, Gino Rovere. The Australian born playboy “Fast” Freddy McEvoy had entered with a Tipo 6CM Maserati for the race, but it is thought that his car had been crashed by a mechanic in practice and so he took over the Tipo 4CM of Rovere for heat two of the race. The results show Rovere as a non-starter with McEvoy finishing 4th. Although some results show McEvoy finishing in a 6CM this is in fact incorrect. There are no photographs of McEvoy at Picardie in a 6CM but a photograph, on file, shows the car no. 26 of McEvoy during the race and in a Tipo 4CM so the theory that McEvoy had switched to Rovere’s Tipo 4CM for the race seems to ring true. The race was won by Bira, his second victory on his E.R.A.

From Picardie, the teams moved on to the Parco Sempione in Milan. For this race ‘1527’ was once again piloted by Omobono Tenni, who, in trying to keep pace with Trossi went off on the 7thlap whilst in second position. After a lengthy pit stop to replace the spark plugs and a broken wheel, Tenni returned to the track but retired shortly afterwards with a broken gearbox. Victory went to Tenni’s teammate Conte Trossi on the works Tipo 6CM Maserati. The final race for ‘1527’ with the works team was on the 2ndAugust at the Coppa Ciano in Montenero. Once again team financier Gino Rovere was on board and finished 5thoverall in the race, his teammate Trossi once again the victor for Maserati.

Between the Coppa Ciano and the Coppa Acerbo at Pescara this Maserati Tipo 4CM was sold by the works to the Scuderia Impero, Roma and was driven for the remainder of the season and into 1937 by Agostino Prosperi and, on one occasion by Alberto Filippi Gabardi. A full list of race entries, entrants and results for ‘1527’ up until 1948 has been expertly compiled by Maserati historian, Adam Ferrington, and is contained within the history file offered for sale with the car. From Scuderia Impero the car was sold, in May 1937, to the private team Gruppo Fiorentina of Florence who campaigned the car for the remainder of the season. The car then passed to Secondo Corsi for the 1938 season. Corsi modified the radiator grille and front cowling and raced with little success. For the 1939 season he fitted the car with Tecnauto independent front suspension. The final owner, before Italy joined World War II in 1940 is noted as Vico Pagliano who campaigned ‘1527’ at Tripoli and in the Targa Florio.

After the war, it is thought that ‘1527’ was the modified Tipo 4CM hill-climbed on one occasion by Felice Bonetto. It was then raced by Gaetano dell’Acqua during the 1947 season and in around 1950 was imported into North America and fitted with a two-seater sports body. In 1957 the Maserati was sold by Bob Morgan of New Jersey and remained with American enthusiasts until eventually ending up with a Canadian Maserati collector during the early 1980s. In the latter’s care ‘1527’ was treated to a total and thorough restoration back to its original and correct 1936 monoposto form, with a body built from factory drawings and a replacement solid front axle supplied by Cameron Miller. During the restoration process, the original cylinder block and crankshaft were found to be beyond repair and new units were made by Maserati expert Tony Merrick in the UK. Photographs contained in the history file show ‘1527’ in rolling chassis form during the restoration and also show the completed article.

‘1527’ returned to Europe during the 1990s and was purchased by the current owner in 2004. The current owner has enjoyed driving the Tipo 4CM at numerous historic events such as The Goodwood Revival Meeting, where, once again, ‘1527’ has been invited to race in September this year. In recent years the Maserati has been expertly prepared by Simon Bish of SPB Historics, a former long-term employee of Tony Merrick who is thus highly qualified in the restoration and preparation of significant racing Maseratis.
(source – racecarsdirect.com)